I got started on some sketches for the new illustration project I was contacted for. First up was logo design, and the goal was something iconic without it being a flat icon per sé. I like that, it’s more fun giving the logo some depth and styling it according to the feel of the game, like it could be part of the world. Here are some designs that were not chosen (I’ve blurred out the name for obvious reasons).

As you can see it is Roman themed, which is cool because I’ve never worked on something in that time period. Obviously I can’t tell you anything more until the game is announced. All I can say is I’m very happy with the final result. Here is a snippet: 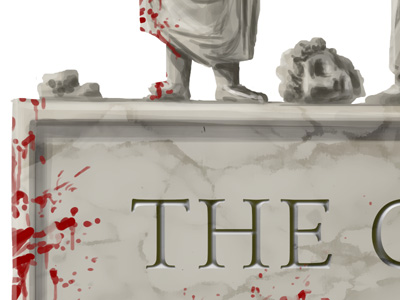 I also worked on new Off-Stage comics, the first of which will debut… today actually! It’s been a long time, but you can check out the new page here. I’ve missed you buddy. More about that in next week’s notes.

Part of my new focus on illustration also includes connecting more with the local illustration communities. I’ve been talking with my drawing and sushi buddies Lowen and Ming about creating a sort of hub for dutch illustrators to come together and share knowledge. And seeing my girlfriend use social media to promote her artwork made me realize my twitter presence is mainly focused on games and international folk. Maybe it’s time to change that.

It remains weird to me how I’m just turned off to gamedev currently. I love all the devs and creativity in the community, but I feel like I just need some time away right now. Like I said last week, I’ll write more about that soon.

And near the end of the week I got an email from an old and appreciated client to work together again. This pleased me much. More on that soon too.

Next week: sticking my hands in the guts of wordpress, and social (media) strategizing.