Last week was a busy one. It started off rough with some anxiety about money after the topic of moving to a new place came up. It’s not exactly dire, but when you’re in this sort of vunerable position where there’s no automatic paycheck every month it’s easy to get swept up in a bit of hysteria. I was hoping the part-time position in Amsterdam would solve that, but that fell through unfortunately. Still, I’m already doing much better this year than the latter half of last year, so things are looking up. And I shouldn’t forget that my job at the post brings in enough to pay the rent. (I’m talking to myself now through this blogpost, can you tell?)

Once the worry abated, I returned to doing the mockups for the KLM project. I finished them all by tuesday and sent them off to Kars to show to KLM. Then I caught up on daily comics, and went for a swim with my pal Lowen.

Wednesday evening I went to a concert at Paradiso, and after that I honestly can’t remember what I did until friday, when I went to Amsterdam for the Hackastory hackathon.

I was well-aquainted with the concept of gamejams and hackathons, but what would happen when the goal was to create an interesting form of storytelling, and there were journalists and such participating, I didn’t know what to expect. But things turned out great. There were some concepts floating around to get started, and you could form your own team based on common interest for a particular idea, so pretty quickly I ended up in a team with Lotte Belice from Beeld&Geluid, architect/designer Bart van Lieshout and Andre Goncalves, a programmer who also works in the Dutch Game Garden at INTK.

Our idea was to create a website/webapp that would let you explore news stories in a non-linear way. Our shared frustration came from having to scan through entire articles to get to the bits you were interested in, and a lack of context to the stories.

So we created Storyweb, a network of nodes with nuggets not much bigger than a tweet, which together form a complete picture of a story, and you can explore them in any direction you like. The nodes are connected by questions, kind of in a choose-your-own-adventure kind of way. You can follow the thread that you find most interesting. It’s not unlike a wikipedia binge in that way. 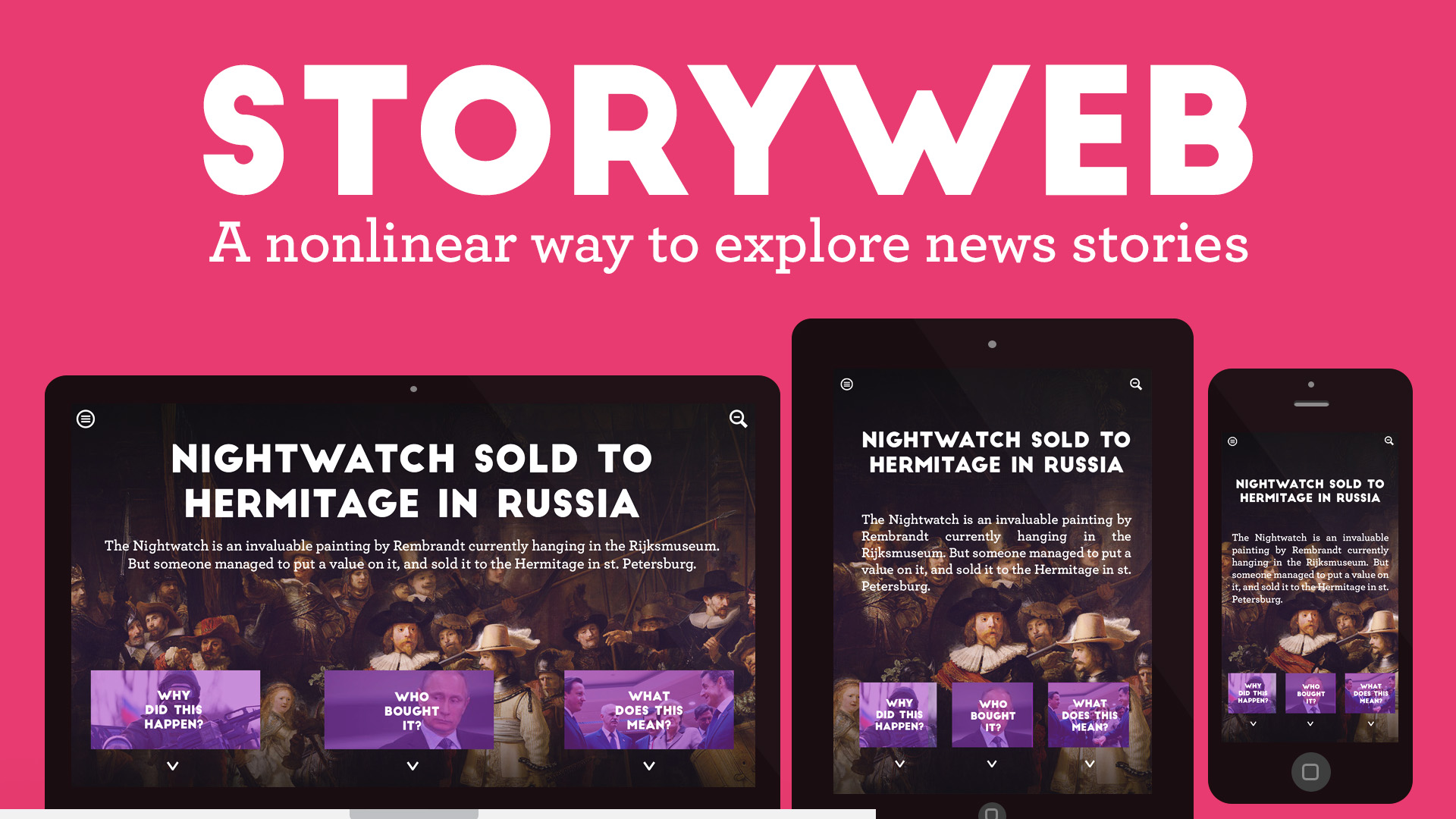 We came up with a fictional story to demonstrate the concept, and you can try the webapp for yourself over here.

I mostly worked to hash out the interaction design and then helped Andre put it together. We were pretty proud of what we managed to do in two days, and the other teams had great ideas to that you can check on via the Hackastory blog. It was an inspiring weekend and I met a bunch of cool people. A+ would hack again. Well done Albertine, Nienke and Emiel.