In the summer of ’05, I commanded an army. I hadn’t planned on it, but things just sorta played out that way.

I was in highschool and didn’t have a whole lot to do at the time, so I decided to check out this hype called Habbo Hotel. I liked the art style and I was into multiplayer games back then after meeting a still dear friend during a Vietcong match. I was barely 17 at the time, and my first encounter with a fellow hotel guest was a 14 year old british girl in the lobby. After asking my age, she replied “Oh. Aren’t you a little old to be here?”, in a moment of apparent realization about the immaturity of the whole establishment. I got the feeling the vast majority of guests were like her, bored chav teens who ditched MSN for something more substantial. But instead of a hindrance, my advanced age proved to give me a sort of moral superiority as I wandered around the hotel, observing many petty squabbles and futile flirtations.

I hung around a few public areas, picked up the lingo at the local bar, and aquired my own room. Rooms at the hotel can be fully customized with furniture, or Furni in Habbo slang, one of the first vestiges of micropayments. Clearly Furni was the currency of this place, with many guests clamoring at wealthy patrons, participating in grueling trials known as Giveaways, which very rarely paid out, but almost always charged an entrance fee. I think you get the picture. Scams ran amok, but there was one reliable way of getting Furni: getting a job.

Jobs in the Habbo Hotel consisted mainly of working in the army or some other pretend establishment. The British Army, The US Army, The Devils Army; I don’t know what it was with those kids but running armies was were it was at. One day I was approached to join the Hispanic Army, and I thought why the hell not.

I showed up at their headquarters (the leader’s room divided into several sections) and was introduced to the ground rules. When on duty you had to wear a uniform, which at the time was an all-black apparel I think. Once I was initiated I was allowed entry to the first restricted section. The second restricted section was for VIPs, and the final section for the big cheeses.

Once recruited, it was our job to spread the gospel of the army, which mainly consisted of sitting at the ‘front desk’ to help interested civilians or to go out into the hotel and find new recruits. There were no rosters or anything, you could just show up whenever you wanted and you would be ‘on duty’, so it was more a formality than an actual job. But then again if you never showed your face you probably wouldn’t get paid either.

I was ‘on duty’ a lot with fellow recruits AznXchicka and Youngsterjoe, and we became a bit of a team, mainly because we had more sense that the rest of the recruits. We actually made an effort instead of just dicking around the employee lounge. And so it was not long before we got promoted, and were involved in more active roles within the army. One of which was attacking rival armies, which basically came down to mobbing their HQ so their own people could not get in, and spamming the chat inside. It was trolling in its purest form, for no real apparent reason, but somehow it was just a lot of fun.

As time went on I rose through the ranks quickly, leaving behind AznX and Joe for more powerful friends. Friends like Flucito, one of the Army’s generals with whom I shared an interest for webdesign and other topics. He took me under his wing and it wasn’t long before I met the leader of the army, Chaos, and his right-hand girl Evil-Latina. He recognized my loyalty to the army, and it wasn’t long before I made it into the high command. Chaos shared his wealth with me and bestowed me admin rights to his army. We became friends, even outside Habbo, and by the time I left the army I was listed as a co-founder.

But Chaos was a troubled man. He had to deal with some personal issues, and abandoned his throne for quite some time. The army fell into disarray, and I chose to retire with my amassed treasure, returning to being a man of leisure, and not long after I departed from the hotel entirely.

Looking back on it all it was an incredibly strange but exciting time. It had been a carbon-copy of the standard ‘rise to power’ story. Except I didn’t end up sleeping with the pixelated fishes. If you look at it now it seems like one big exercise in futility, but back then it gave us purpose. We belonged to something greater. And maybe that was enough.

I logged on today for old time’s sake, the first time in 68 months, to enjoy one last mocha among my spoils of war. 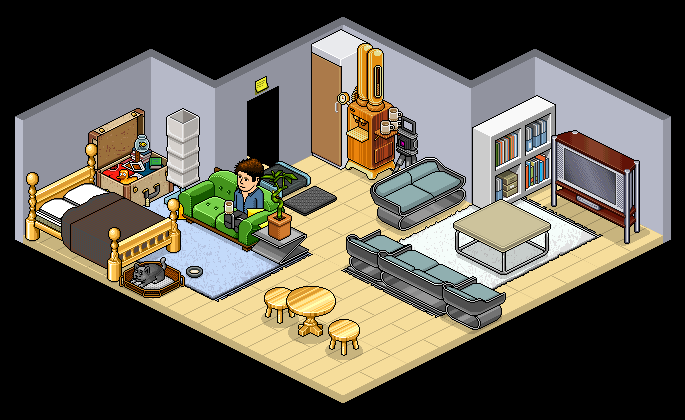 0 thoughts on “My days as an army general”