Today I’d like you to meet my next game, The Last Voyage Of The Orlova.

Orlova, for short, is a 2D sidescrolling exploration game about an Irish lighthouse keeper that comes across the ghost ship Lyubov Orlova. The MV Lyubov Orlova is a real (decommissioned) cruiseship that was lost in a storm in 2013, when it was being towed to a scrap yard. Since then, nobody has succesfully rediscovered the ship. In 2014 its radio blipped off the coast of the UK/Ireland, and later disappeared again. This game is an exploration of what could have happened if someone on the coast encountered the ship during that time.

In the game you control the lighthouse keeper as he discovers the ship off the coast of his island, and goes to explore it. Ultimately, he wants to get the ship away from the coast and from the shipping lanes he oversees with his lighthouse. Armed with a map and an axe, you can walk up and down all the decks of the ship in search of clues about the history of this ship. On the way you will encounter obstacles that need to be overcome, such as barricades to be chopped down, flooded compartments, and droves of rats blocking your progress.

The game will come out for PC/Mac/Linux somewhere this year. More info coming soon.

One morning in 2004 or so, I got up and decided I wanted to make a video game.

I was about 15 or 16, I had just finished Broken Sword, and went in search of a program that could let me make an adventure game myself. I tried a few different ones, and eventually settled on Adventure Game Studio. With it I started my first game, based on a 44-page comic I had drawn the years before. It was called The Majestic Conspiracy. 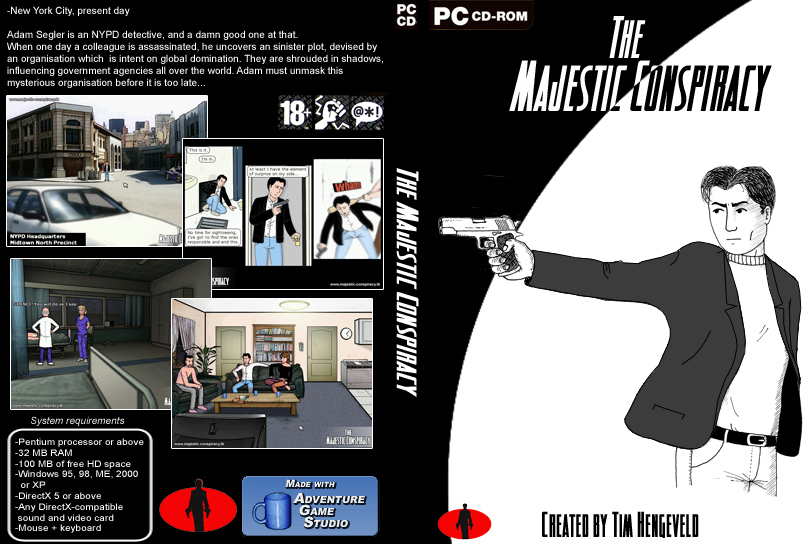 For the next ten years I worked on it off and on, through several iterations of the script and the art style, through multiple versions of AGS, four years of game design college and an internship. It was the classic too-ambitious-to-finish first project. So today I thought I’d write about it, to honor its demise.

END_OF_DOCUMENT_TOKEN_TO_BE_REPLACED

Amidst calling plumbers and garages and landlords, I returned to porting my Fawlty Towers game to Unity. An update in the Adventure Creator package made it much easier to work with the built-in Unity 2D stuff – especially the Polygonal navmesh feature, which allows me to map out where the characters can walk by drawing a shape, a galactic improvement over using a bunch of rectangular to map out the area.

Navmesh rectangles vs a polygonal navmesh:

The sensible thing to do would be perhaps to work more on Black Feather Forest (which I did do some GUI design for), but seeing the Monty Python Ministry of Silly Walks game appear in the App Store, with narration by John Cleese (meaning he condones it) made me hopeful he might look kindly upon my Fawlty Towers game aswell, so I felt the breeze of my attention go in that direction presently. Also because the scope of that game is so compact that it could realistically be finished in a sprint or two.

I also completed Wolfenstein The New Order which is rad.